I received an invitation to celebrate my birthday at a private club with a shooting range in NYC.  Shooting and dinner in a jacket and tie – this I have to see?!?

So on my b-day weekend, my family met at the Italian Club, a nondescript brownstone on MacDougal street in the heart of Greenwich Village, NYC. Tiro a Segno (translation shoot the target) is oldest (1888) Italian-American club in country. A round of cocktails in the lounge, a first course of antipasto, a second course of mixed pasta, accompanied by several bottles of wine and the evening could be complete. But we were only at the Intermezzo course. The dictionary defines Intermezzo as a between course serving used in Europe to cleanse the palate ie sorbet.  But this evening’s intermezzo was quite different. We exited the dining room down to the basement shooting range where we took turns shooting .22 gauge caliber rifles. Can you believe that some ladies were better shooters than guys! 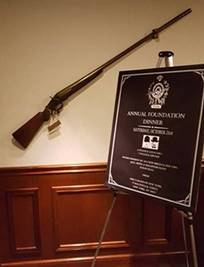 The wine of choice for the evening was Produttori dei Barbaresco, a screaming value for $50 (average retail price $30). Barbaresco, a medium body red wine from Piemonte (translation Piedmont) in northern Italy, is made from 100% Nebbiolo as is the more well-known Barolo from the neighboring village. When comparing the two greatest wines from Piedmont, Barolo is described as the masculine king – stern, hearty tannins and flavors while Barbaresco is the feminine queen – lighter, more balanced and softer tannins which matures earlier. 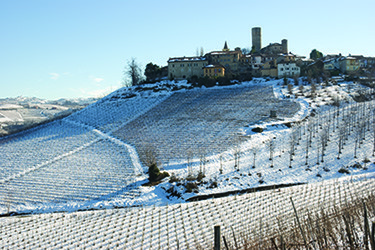 Barbaresco town (population 650) is perched on hill overlooking surrounding vineyards. The tiny town has a few restaurants, two wineries (Produttori and Gaja are neighbors) and nothing else. Summers are warm but winters are austere being located between the Alps and Apennine mountain ranges. 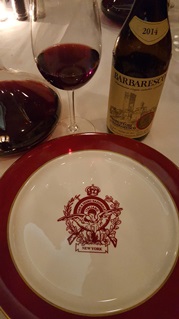 The Produttori is a co-op winery of 50 families and 250 acres operating since 1958. The winery produces a simpler Nebbiolo Lange released after 12 months for early consumption and cash flow. Produttori dei Barbaresco (normale) is produced in every vintage but 9 single-vineyard (crus) Barbaresco Riservas are released only in great vintages. In non-vintage years when no Riserva is produced, Produttori normale includes 60% crus (single-vineyards) versus 30% in vintage years. Produttori Normale is released in January after 2 years aging and Riserva is released in January after 4 years aging. Recent vintage years are 20111, 2013 and 2014.

Antonio Galloni, author of Piedmont report, with 93 rating (normale) says “2014 Barbaresco is fabulous. Lifted in the glass, with striking perfume and captivating translucency, the Produttori’s Barbaresco captures all the elements that make this vintage so compelling. Today, the 2014 is very, very young. What stands out most is its textural finesse and balance. It will be a number of years before the aromas and flavors are fully expressive. The only thing that might come as a surprise is the touch of new cask in this wine. Otherwise, the 2014 is one of the finest editions of the straight Barbaresco I can remember tasting, not to mention a superb example of how magnificent this vintage is in Barbaresco. Don’t miss it. As a postscript, the Produttori will release 2014 Riservas as well.”

Barbaresco and Barolo are names of wines and towns separated by only 10 miles.
3 “B”s of red wine from Piedmont include Barbera, the only “B” that is the name of wine and varietal.

4 thoughts on “Shooting and Barbaresco”

Preparing our Easter feast...
Some eat fish often but in our house it's a once a week thing. Coincidentally it's Fridays, a throwback to Roman Catholic traditions. Today is Good Friday, the end of Lent, and a good reason to drink something white from the cellar...
Dare I say Sunday pasta and Sangiovese are like peas and carrots (aka Forest Gump)?
Even with "dead yeast" my Margherita pizza was buona but the wine was perfetto!