On a cold winter night a well-dressed Asian man came into the store looking to purchase a bottle of expensive Bordeaux (French wine). After showing the few Bordeaux bottles from the reserve room, he said “do you have a more expensive one”? I replied sheepishly that the $300 Château Smith Haut Lafitte Pessac-Leognan was our most expensive Bordeaux and directed him to a store with an extensive French collection.  Then I asked “what is the importance of more expensive”? He explained that it was a gift for a Chinese businessman and only expensive Bordeaux is considered acceptable – a lower priced Bordeaux ($300), an Italian or Californian wine might be disrespectful!

I was  intrigued by this dialogue so I did some research. China disrupted the wine world in a manner reminiscent of the early 1990’s when Japan was buying America’s trophy properties like Rockefeller Center and Pebble  Beach golf community. Since 2005 China has experienced massive economic growth and demand for fine wine has exploded.

Prices at wine auctions around the world have skyrocketed from newly minted Chinese millionaires. Culminating in 2011 at Sotheby auction in Hong Kong, case of 1982 Chateau Petrus sold for $77,500 ($6,500/bottle) representing 105% over average price listed in Wine Spectator. And to date, Chinese owners have purchased over 100 chateaus in Bordeaux and are exporting their wines to China.

What goes up, must come down!

Is there reason for concern? This question was asked in 1990 about Japan’s investments in America. Within a few years Japan was suffering from a banking crisis and a poor economy. Japanese owners who bought Rockefeller Center properties in 1989 filed for bankruptcy in 1995. Pebble Beach property bought in 1990 was sold in 1999 at $341M loss and the Japanese owner was investigated for money laundering.

But China is the 800 pound gorilla in our global economy with a population of 1.4 billion representing 19% of world population (US population is 320 million). China also ranks #2 with 2.4 million millionaires vs 7.3 million in USA.

Strangely similar to Japan’s boom (and bust) in 1990’s, China’s economy has been slowing. Recent fortunes in China’s stock market are disappearing, China’s currency (Yuan) is steadily devaluing and the government’s intervention is making matters worse. In 2013 a new president enacted rules to eliminate massive government corruption and banned the gifting of expensive gifts such as fine wines. 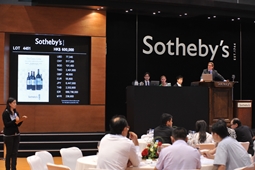 Prices at wine auctions are down 40% from their 2011 highs. Though Chinese buyers are still interested in purchasing Bordeaux and Burgundy properties, the frenzy has subsided (for the moment).

Wine consumption in China now exceeds France and Italy combined.  Yao Ming (ex NBA player) has opened a Napa winery which is popular with Chinese tourists. Like it or not, China’s influence is here to stay.

Despite China’s slowing appetite for wine, a return to normalcy in wine pricing is NOT foreseeable. Prices for good (not only the best) wines from many regions such as California, Italy and Spain creep higher with each vintage.

And so the challenge remains … find good wines at affordable prices.

4 thoughts on “China and Bordeaux”

Chablis is a beautiful rendition of Chardonnay, albeit French sryle. Production is done in stainless vats so the style is unoaked. If proposed tariffs are enacted, this wine will probably not be exported to USA.
IT'S HAPPENING!!! Last week this French wine was $24.99 and now it's $29.99 (20% increase). Thank you Tariff Man for enacting 25% tariff on French wines effective Oct 18. Many importers did not pass this increase to consumers but that's old news. And there's more to come if 100% tariff becomes effective later this month and this tariff will apply to all EU countries. Stay tuned...
Get it while you can - many wines from France may no longer be available in USA! Vacqueyras is 1 of 9 crus in southern Rhone Valley, a region that has popularized the GSM blend (Grenache, Syrah, Mourvedre). Châteauneuf-du-Pape is the un-disputed king (full-body) of the region that is best with aging but other appellation wines (Côtes du Rhône) are approachable at young age (1-5 years). Today, Côtes du Rhône (CdR) wines are priced $15 to $25 but this may soon change. President Trump has proposed 100% tariff on all wines from European Union (EU) countries that could be effective by end of January (2020). If this tariff is imposed, the retail price of French wines will increase significantly. And most likely, the importer will find another market – dare I say China! Now how does this tariff make sense?
A beautiful wedding celebration has ended after 3 days with family and friends. The crowd is gone and life returns to normalcy. So it’s a time to open a bottle of vintage champagne, Dom Perignon 2000! Salute amd many years of happiness, Mike and Steph